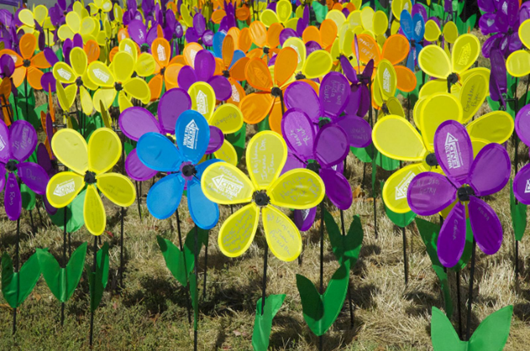 For the second year in a row, WCA Retail employees joined forces with the Alzheimer’s Association to participate in the annual “Walk to End Alzheimer’s”.  Taking place at Holyoke Community College on Sunday, September 16th, Team Whalley joined thousands of others who support this cause.  Led by Heather Kies (Project Manager for WCA Retail), our team of co-workers, families and friends have helped raise almost $5,000!

Founded in 1980, the Alzheimer’s Associations goal is to help create a world without Alzheimer’s.  The statistics are startling:  in the United States alone, it is the 6th leading cause of death, effects 5.7 million people, and is responsible for over $277 billion in healthcare costs each year.

But the numbers only tell half the story.  After Heather lost her father to this disease, she worked to form Team Whalley.  After fundraising and making homemade tye-dye shirts, our team was ready to go!  It was a beautiful morning for this year’s walk, and it is always a deeply emotional and touching day.  We found joy in the hundreds gathered, all with the same goal, to end this horrible disease once and for all.

One of the most touching parts of the day can be found in the Promise Garden.  Each person walking is given a chance to “plant” a flower to represent why they are walking: Blue is for people living with the disease; Yellow is for those supporting or caring for someone with this disease; Purple for those who have lost someone to this disease; and Orange for those who support the vision to end Alzheimer’s once and for all.   It is the goal of the Alzheimer’s Association to “plant” the first WHITE flower, symbolizing the first survivor of Alzheimer’s. It’s a lofty goal, but an achievable one.  A goal that is deeply personal to many of our employees here at WCA Retail and one we are proud to be a part of.

In early May, our customer began re-opening their locations. They asked for WCAOEM’s support in…

Here are some of the projects that were either assigned or proposed: SEO – How…

This website uses cookies to improve your experience while you navigate through the website. Out of these cookies, the cookies that are categorized as necessary are stored on your browser as they are as essential for the working of basic functionalities of the website. We also use third-party cookies that help us analyze and understand how you use this website. These cookies will be stored in your browser only with your consent. You also have the option to opt-out of these cookies. But opting out of some of these cookies may have an effect on your browsing experience.
Necessary Always Enabled
Necessary cookies are absolutely essential for the website to function properly. This category only includes cookies that ensures basic functionalities and security features of the website. These cookies do not store any personal information.
Non-necessary
Any cookies that may not be particularly necessary for the website to function and is used specifically to collect user personal data via analytics, ads, other embedded contents are termed as non-necessary cookies. It is mandatory to procure user consent prior to running these cookies on your website.
SAVE & ACCEPT